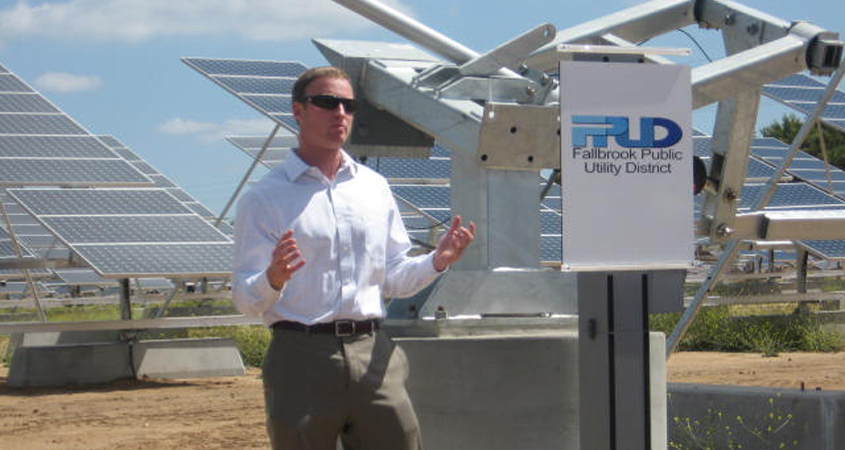 Jack Bebee was named the new general manager of the Fallbrook Public Utility District after a decade of serving the district. Photo: Courtesy FPUD

He has been with the district 10 years and came to FPUD from the private sector. He was hired as a consulting engineer working for Malcolm Pirnie (now Arcadis), an environmental engineering company with a primary focus in water and wastewater, where he managed large-facility treatment projects.

Bebee was the lead in the job to begin the state-of-the-art process of using ultraviolet light to disinfect the water in Red Mountain Reservoir, the district’s 440-million-gallon reservoir.

This innovative project was the first of its kind in California. Using UV light to disinfect the open, treated-water reservoir meant FPUD could forego more expensive options: either placing a cover on the reservoir or building new covered storage facilities.

Bebee’s expertise quickly caught the attention of FPUD management and he was hired soon after completing the job.

Since then, that project has received state awards and Bebee has been instrumental in a number of other projects for the district.

“We knew we needed someone with strong engineering experience and an equally strong commitment to the community,” said Board President Al Gebhart. “Jack is very intelligent, incredibly dedicated and works hard until the job is done – and done well.”

Other projects he has lead include the installation of solar panels at the water reclamation plant on Alturas Road, a massive overhaul and upgrade of the plant in 2015, and most recently the Santa Margarita River Conjunctive Use joint project with Camp Pendleton which will allow FPUD to use local water.

“Jack was a key player in this project and reaching a landmark decision resolving 66 years of legal battles,” Gebhart said.

The conjunctive use project will capture locally available water that currently flows through the Santa Margarita River and into the ocean. The project creates a local water supply that will reduce FPUD’s dependence on expensive imported water. It is expected to produce about 30 percent of the district’s water and is anticipated to be online in 2020.

Bebee lives in Bonsall with his wife, Candace.

Showers and thunderstorms are moving NE across coastal ... San Diego County at this. Watch for downpours, small hail and lightning!

The line of storms will be affecting the I-15 corridor shortly. #CAwx