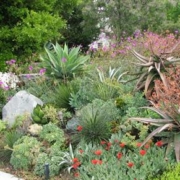 Encinitas, CA—Olivenhain Municipal Water District and San Dieguito Water District are offering a free workshop to assist residents in selecting climate-appropriate plants for their landscapes. The workshop will be held Tuesday, March 24, from 5:30 p.m. to 8:30 p.m. at the Encinitas Community Center, located at 1140 Oakcrest Park Drive in Encinitas.

After securing more than $350 million for water supply projects in the San Diego region – along with other benefits – the San Diego County Water Authority’s Board of Directors on Feb. 27 voted to dismiss related claims against its Los Angeles-based supplier, the Metropolitan Water District of Southern California.

This week, Southern California may have its most soaking rain since Christmas after parts of Northern California picked up their first rain since January. To say it has been dry recently in the Golden State is an understatement. The state just had its driest February in 126 years, according to NOAA. Drought has also returned. About one-third of California is in moderate drought, and nearly 70% of the Golden State is abnormally dry, according to the latest report from the U.S. Drought Monitor. Reservoirs remain in fairly good shape, but the snow-water equivalent (how much water is in the snowpack) in the Sierra Nevada is about half of what is expected at this time of year.

Twenty-five to 35 million gallons of raw sewage is pouring into the ocean every day and could keep flowing all summer long. Imperial Beach Mayor Serge Dedina tweeted Friday about the fluctuating flow rate of the Tijuana River, which could indicate that parts of Mexico are using the river as an open sewer. Dedina recently told KUSI “this could be the worst round of pollution we have ever seen coming at us. In 2017, we had 250 million gallons spilled, now we have 50 million gallons, a minimum of 50 million gallons every single day.”

Artificial turf is not the way to squeeze more time out of Oceanside’s playing fields, members of the city’s Parks and Recreation Commission said last week. Health concerns, maintenance costs, and the disposal of the worn-out plastic all need more study, said Commissioner Diane Strader. Several of the commissioners said the city should build more grass fields, not install fake turf on existing ones. The Oceanside City Council asked staffers on Dec. 4 to study the feasibility of using artificial turf at some parks as a way to get more play time on the existing fields. Parks and Recreation Division Manager Mark Olson presented a report to the commission last week and it’s tentatively set for a presentation at the council’s March 25 meeting.

It’s understandable that state Senator Anna Caballero wants to feel “great hope and guarded optimism” for Governor Newsom’s voluntary agreements (“California governor’s water negotiations leave no one behind,” Page 6A, Feb. 24). Everyone working on California water wants meaningful solutions. Unfortunately, too many are left behind in these deals and we have seen no evidence of “solutions that can benefit everyone.” Environmental justice communities of Stockton and the Bay-Delta have not been considered in the voluntary agreements plan, or in the San Joaquin Valley Blueprint. During the last year, the Delta community worked with the Newsom administration on environmental protections for the region.

If our state wants to remain economically competitive, it must re-engineer the troubled estuary that serves as the hub of California’s elaborate water-delivery system — the Sacramento-San Joaquin River Delta. The best and most viable way to do this is via the single Delta tunnel project proposed by Gov. Gavin Newsom, which the Silicon Valley Leadership Group and our 350 members support. The water that flows through the Delta serves nearly 27 million people in our state and ensures 3 million acres of farmland stays productive. Yet, the current Delta water delivery system – comprised often of simple earthen levees – is fragile and extremely vulnerable to catastrophic disruption from earthquakes, floods, and rising seas.

Forty years ago, farm neighbors told my surprised family that our wildlife friendly farming practices were organic – which doubled the value of our rice crop. Our farming methods evolved after my father-in-law’s return from World War II. Like many peers, he tried new technologies – chemical pesticides and synthetic nitrogen fertilizer – and saw them kill the wildlife he loved and the soil he relied on. He sensed that a food system based on toxic chemistry was a dead end. Instead, he developed an approach that incorporated wildlife – instead of fighting it.

The Klamath River Renewal Corporation announced on Monday that they have submitted requested documentation to the Federal Energy Regulatory Commission that demonstrates that they have sufficient funds to complete the removal of four dams on the Klamath River. Last week, KRRC announced that they’ve hired a company to ensure all the various phases of the project run smoothly and “in concert with one another.” KRRC selected McMillen Jacobs Associates to provide what is referred to as “owner’s representation services.”