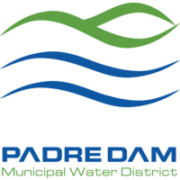 Santee, Calif.– Padre Dam Municipal Water District’s Board of Directors recently accepted the Platinum District of Distinction Recognition, the highest accreditation for a district awarded by the Special District Leadership Foundation. This designation recognizes Padre Dam for its sound policies and practices in the areas of fiscal management, governance, Board conduct, district finances and transparency.

Ensuring water for future generations requires investing and investigating big ideas, according to Sandy Kerl. Kerl, acting general manager of the San Diego County Water Authority, shared some of those ideas today in San Diego, as she delivered the opening remarks at the California-Nevada Section of the American Water Works Association annual fall conference, which runs through Thursday at the Town and Country Hotel Convention Center.

The heavy equipment is taking wet sand from the water line up to the public entrance areas, where it will protect access points to the beach.

On Wednesday, the work was being done near the 23rd Street entrance. On Tuesday, it was closer to homes near 29th Street.

A red flag fire weather warning will be in effect from 5 a.m. Thursday until 5 p.m. Friday for all of San Diego County except coastal areas as the region experiences moderate Santa Ana winds that could gust 50 to 60 miles an hour in some mountain passes. The National Weather Service says it also issued the warning because temperatures will be way above seasonal averages and the relative humidity will be very low.

The ongoing fight between environmentalists and agriculture over California’s scarce water supplies was renewed Tuesday after the federal government issued a comprehensive plan to boost water “flexibility” that opponents claim is a giveaway to farmers tantamount to killing off imperiled fish. The proposal, contained in a review, or biological opinion, of the state and federal water distribution systems, loosens restrictions on water deliveries proposed in July by the National Marine Fisheries Service to protect chinook salmon, steelhead trout and delta smelt.

Full Story
https://www.waternewsnetwork.com/wp-content/uploads/2018/02/water-news-network.png 0 0 Ed Joyce https://www.waternewsnetwork.com/wp-content/uploads/2018/02/water-news-network.png Ed Joyce2019-10-23 09:58:462019-10-31 11:35:39Federal Officials Rejigger Rules on Water Deliveries-Some Say at Expense of Fish
A water line break allowed more than 9.2 million gallons of treated and untreated wastewater to flow from Tijuana into the U.S. this week. The transboundary flows were reported Monday night due to a break in the main water line from the La Presa-Aguaje la Tuna urban aqueduct at about 11 p.m. CILA said the break produced flows that ended at the Tijuana River channel, causing a berm at a CILA pump station to collapse and allow wastewater into the U.S. The flow in the Tijuana River exceeded the pump station’s capacity
Full Story
https://www.waternewsnetwork.com/wp-content/uploads/2018/02/water-news-network.png 0 0 Ed Joyce https://www.waternewsnetwork.com/wp-content/uploads/2018/02/water-news-network.png Ed Joyce2019-10-23 09:55:492019-10-29 13:55:59Tijuana Water Line Break Causes 9.2 Million Gallons of Wastewater to Flow Into US

The San Diego County Water Authority has an Integrated Regional Water Management plan and the state’s Department of Water Resources has a grant program for IRWM projects. The latest SDCWA grant applications include one for the Fallbrook Public Utility District’s pilot program which would recharge recycled water in the Santa Margarita River basin. A unanimous Sept. 26 CWA board vote approved grant applications totaling $14,416,156 including $687,500 for the FPUD indirect potable reuse pilot project.

San Diego County’s Local Agency Formation approved a memorandum of understanding with Riverside County’s LAFCO which will delegate entirely to San Diego LAFCO the potential reorganization in which the Fallbrook Public Utility District and the Rainbow Municipal Water District would detach from the San Diego County Water Authority and become part of the Eastern Municipal Water District. The 8-0 LAFCO board vote, Oct. 7, also included direction to LAFCO staff to review the economic impacts not only for FPUD and Rainbow but also to the SDCWA and to the 22 other CWA member agencies.

A new pilot program has been launched by numerous organizations in Southern California to aid residents in selecting more native plants for their homes and gardens to become even more water-efficient. Metropolitan Water District (MWD) of Southern California and local water agencies have teamed up with the California Native Plant Society (CNPS) to boost the number and variety of native plants offered at local nurseries.

The decadeslong Pacific Northwest salmon war may be nearing the end.

But it’s economics, not fish, that could be the demise of four dams at the center of the fight.

The dams on the Lower Snake River — besieged by conservationists and biologists for killing fish — are now battered by falling prices for renewable energy, skyrocketing replacement costs for aging turbines and a growing tab for environmental mitigation.

“The jig is up,” said Daniel Malarkey, a senior fellow at the Sightline Institute, a regional think tank focused on energy, economic and environmental policy. “We had this super-cheap power relative to other resources, and we’ve piled a bunch of extra costs on it.”