San Diego-based California American Water filed an application to set new rates in each of its service areas for 2021 through 2023. If approved by the California Public Utilities Commission, the new rates will take effect Jan. 1, 2021.

If it seems that certain areas of the United States are benefiting more than others from the country’s current construction boom, it’s because they are, according to a new report from research firm GlobalData.

In fact, of the more than 11,200 U.S. projects the company is tracking — public and private, in development and under construction — 10 states have captured about 60% of the $3.7 trillion those projects represent.

Agricultural water suppliers must develop annual water budgets and drought plans that meet requirements of recently enacted legislation, and are meeting with state officials to comply with the updated law—a process that could ultimately affect water costs for California farmers and ranchers.

While the technical potential of closed-loop pumped hydro storage is an estimated 500,000 sites worldwide, the cost of pumped hydro, especially as it compares to the cost of battery storage, remains an issue.

The nation’s coasts were hit with increased tidal flooding over the past year, part of a costly and perilous trend that will only worsen as sea levels continue to rise, federal scientists warned Wednesday.

The University of San Diego dedicated on Wednesday the second free-standing solar and wind energy tower installed on its campus by a local startup. 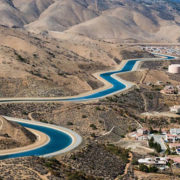 💧Metropolitan ... Water District Gets a New Chief. What Changes Might Adel Hagekhalil Bring?