You are now in California and the West News category. 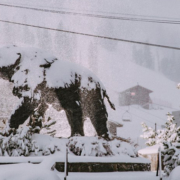 It has been a winter – and spring – for the record books, for California reservoirs and ski resorts. And, it’s not over yet.

Snow has continued to fall throughout May, with several inches or more in the Sierra Nevada and the southern California mountains.

In the lowlands, the City of San Diego has experienced one of its wettest months of May on record. The San Diego National Weather Service reported that Alpine and El Cajon set daily precipitation records on May 23.

May snowfall in the Sierra Nevada

“It’s atypical to see the snowpack increase in May,” said Alexi Schnell, water resources specialist with the San Diego County Water Authority. “The impact of atmospheric river storms helped push snowpack levels in the northern Sierra to 172 percent of normal as of May 23.” 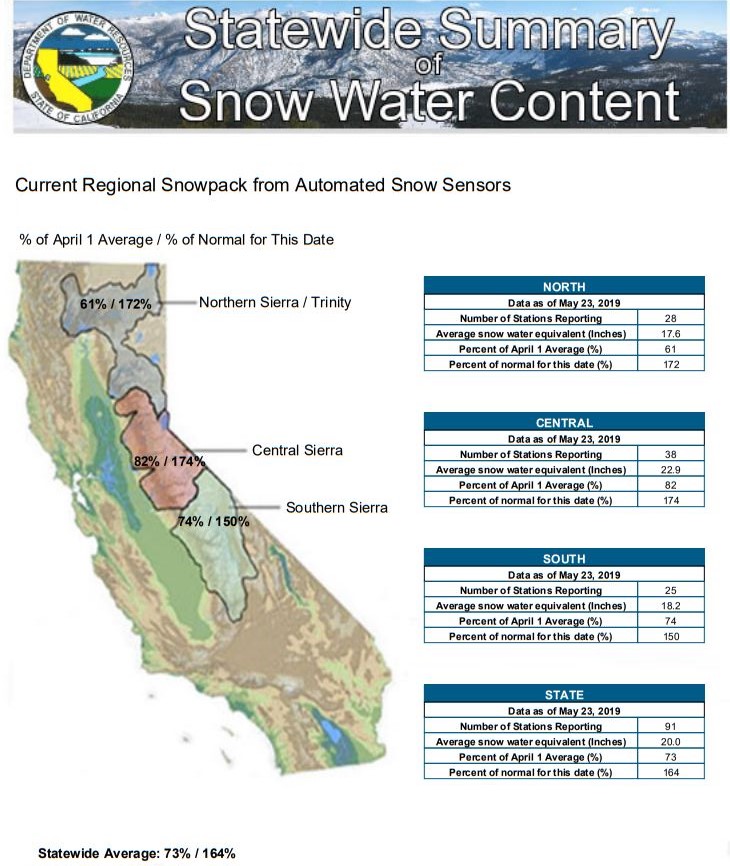 A bountiful year for snow continued into May in the Sierra Nevada. Graphic: California DWR

Record snowfall also allowed many ski areas, from Squaw Alpine to Mammoth Mountain, to extend their ski seasons into late-Spring, with fresh powder in May a bonus for skiers.

A May to remember at Mammoth Mountain

Mammoth Mountain tweeted that it has received 29 inches of snow as of May 23, “officially our snowiest May on record, beating out May 2015.” (Video courtesy of Mammoth Mountain). 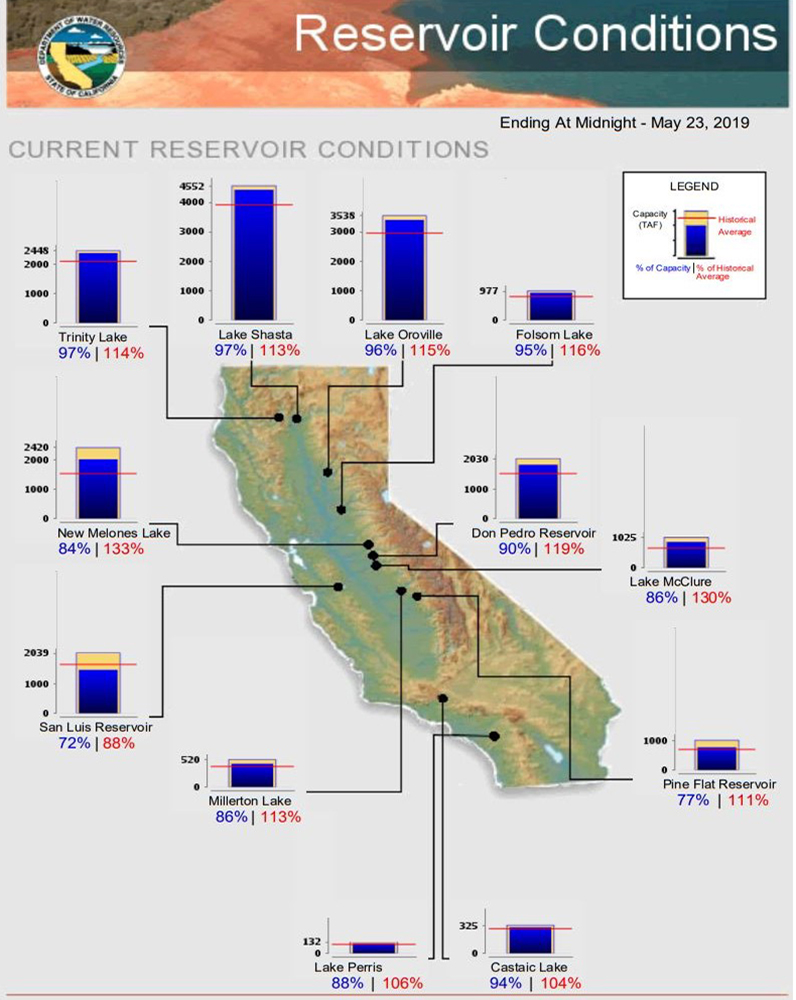 Most major California reservoirs are near capacity and significantly above historical averages for May 23. Graphic: California DWR

Schnell cautions that this current water year is an exception, and the climatological cycle in California can bring several consecutive years of drought, like the 2015-2017 period, which prompted mandatory water-use reductions.

While the winter and spring has been ‘atypical,’ the summer could set some records too.

“Looking ahead over the next three months, the National Weather Service forecast shows that there is a greater than 50 percent chance the region will be warmer than normal,” Schnell said. 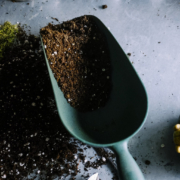 When you’re beginning a sustainable landscaping project, it can be challenging to remember all the things you need to consider along the way. Use our Sustainable Landscaping Guide Project Checklist to stay on track and achieve your goals.

And most of all, take time to admire and enjoy your new yard!

Download the project checklist on pages 53-56 of the Sustainable Landscapes Program guidebook, and refer to them when you aren’t sure how to proceed.


This article was inspired by the 71-page Sustainable Landscapes Program guidebook available at SustainableLandscapesSD.org. The Water Authority and its partners also offer other great resources for landscaping upgrades, including free WaterSmart classes at WaterSmartSD.org.
https://www.waternewsnetwork.com/wp-content/uploads/2019/05/gardeningshovel_845x450.jpg 1022 1920 Kristiene Gong https://www.waternewsnetwork.com/wp-content/uploads/2018/02/water-news-network.png Kristiene Gong2019-05-24 11:24:452019-05-24 11:24:45Use Our Sustainable Landscaping Project Checklist

It has been a winter – and spring – for the record books, for California reservoirs and ski resorts. And, it’s not over yet. Snow has continued to fall throughout May, with several inches or more in the Sierra Nevada and the southern California mountains. In the lowlands, the City of San Diego has experienced one of its wettest months of May on record. The San Diego National Weather Service reported that Alpine and El Cajon set daily precipitation records on May 23. The normal rainfall at Lindbergh Field during the water year (October 1 – September 30) averages about 10.3 inches. In the current water year, 12.7 inches of rain has been recorded at Lindbergh Field as of May 23.

With more than 800 miles of coastline and a great big ocean out there, California shouldn’t be always be scrambling for water as if it were in the middle of the Sahara Desert. But politics tend to make goods scarce rather than plentiful. But sometimes there’s good news. Such as a recent report that the San Diego Regional Water Quality Control Board has issued a permit allowing a permanent seawater intake to be built at the Claude “Bud” Lewis Desalination Plant in Carlsbad. Once fully operable in 2023, the new intake system will supplement the 50 million gallons of “drought-proof” potable water the plant currently pumps out daily, most of it drawn from the Agua Hedionda Lagoon located next to the facility.

San Diego County Water Authority staff have proposed a 4.3 percent increase in the cost of treated water in 2020, citing cost increases and continued investment in local supplies. Authority staff said the increase is driven by higher costs for water supplied and transported by the Los Angeles-based Metropolitan Water District, as well as increasing maintenance costs for reservoirs at Lake Hodges and San Vicente, and spending for upgrades to the desalination plant in Carlsbad.

Tom Dudley stood at an old Fillmore watercress farm off a rural stretch of highway and described the dream. A forest of willow and cottonwood trees, shallow wetlands for wading birds and some deeper spots for ducks – all just a football field or so from what many call the last wild river in Southern California. The Santa Clara stretches 84 miles and through two counties from the San Gabriel Mountains to the ocean just south of Ventura Harbor. Over the past 20 years, millions of dollars have been invested to protect and restore the river, work that some say has reached a tipping point.

A facility designed to increase water supply reliability for the Inland area was dedicated in a light rain at the foot of the hulking Seven Oaks Dam near Highland on Thursday, May 23. Officials used a new concrete diversion box to move water rushing from the dam to a new sedimentation basin and beyond. The water is intended to spread out and seep into a groundwater basin, which officials have said is historically low due to a 20-year drought. Residents from Yucaipa to Colton and users in Riverside County will benefit from the project.

Elsinore Valley Municipal Water District is implementing a Bee Keeper First program to help protect local bee populations while ensuring safety within the community through relocating bees found in water meter boxes or at district facilities. Whenever possible, staff will contact a beekeeper to have the hive removed and relocated, through the Beekeeper First Program. The cost effective and environmentally friendly approach was realized through a regional partnership with Eastern Municipal Water District, Rancho California Water District and local beekeepers. Through this partnership, local bee populations within a combined 800 square miles will be safely relocated.