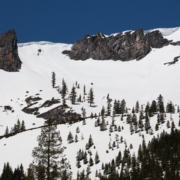 Associate Professor Amato Evan at UC San Diego’s Scripps Institution of Oceanography analyzed snowpack data from 1982 through 2017, publishing his analysis in the December Journal of Applied Meteorology and Climatology, and presenting his findings at the American Geophysical Union Fall Meeting in Washington, D.C.

Evan found no decline in snowfall totals overall, but he discovered snow in mountainous regions is disappearing earlier in the year – in line with earlier projections and modeling. California and other western states rely heavily on snowfall and snowpack for water. When the snowpack melts, it fills reservoirs, a vital resource for cities and farms.

Three decades of investments to diversify the San Diego region’s water supply sources with seawater desalination, recycled water and other supplies have lessened the local impact of snowpack variations, said Dana Friehauf, water resources manager for the San Diego County Water Authority. The San Diego region relies on snowmelt in the Rockies and the Sierra Nevada, along with a variety of local water resources. In addition, the Water Authority has expanded local water storage by raising San Vicente Dam and more than doubling the reservoir’s capacity. That allows the region to hold more imported supplies during wet years to prepare for dry ones.

“By increasing water-use efficiency and investing in drought-resilient supplies and local storage, the San Diego region is less susceptible to changes in snowmelt,” said Friehauf. “But climatic shifts likely will be an important factor in water management across the West for years to come.”

Evan used data for his research collected from a network of over 400 snow telemetry sensors across the western U.S. The sensors compress and expand as snow falls and melts, measuring the weight of the snowpack throughout the season. Evan developed a mathematical expression he could apply to the observations which can identify trends in snowpack variations over the course of the winter season.

Second, higher elevations are showing snowpack characteristics normally found at lower altitudes, with a gradual build up and gradual decline. This translates into less snow and earlier melts. While this has been shown in climate model simulations, the Scripps study is the first time it has been observed. Evan’s findings are consistent with numerous other methods of measuring changes in the seasons.

“The power of this work was the ability to examine how and why snowpack is changing throughout the year,” Evan said in a Scripps news release. “In terms of freshwater in the West, the total amount of snow we receive during the year is important, but how long into the spring that snow stays frozen up in the mountains is also critical.”

The Scripps research was supported by funding from the Climate Program Office at the National Oceanic and Atmospheric Administration.

Not to take the romance out of Valentine’s Day, but this year a sturdy umbrella might be a better gift than chocolate or flowers. The National Weather Service says a huge, warm plume of moisture from the sub-tropics will arrive in San Diego County and drench a region that’s already squishy from earlier storms. The system will begin spreading rain late Wednesday. But the core will hit on Thursday — Valentine’s Day — when the moisture rides up the side of local mountains, condenses, and unleashes heavy rain. Its called orographic lift.

Connie Bakken opened her bedroom window Sunday morning and didn’t quite believe her eyes. “I called my husband and said, ‘Why is the stream purple?” she says. Bakken lives in a Rancho Bernardo home that overlooks a creek just west of Matinal Circle. What she saw – the creek where she loves to watch turtles and crabs live naturally turn into a deep, unnatural purple. “It didn’t look like water,” Bakken says. “It actually looked like purple paint.”

Thousands of birds were discovered dead at the Salton Sea last month, raising new concerns about the lake’s declining health. California Department of Fish and Wildlife workers cleaned up the carcasses at the Sonny Bono Salton Sea National Wildlife Refuge after hunters initially reported the gruesome bird die-off. More than 400 species of birds use the Salton Sea’s wetlands as a stop along the Pacific flyway for migratory birds. The man-made Salton Sea is receiving less and less water from agricultural runoff and the Colorado River, causing it to shrink dramatically. Andrea Jones, director of bird conservation for Audubon California, said the birds fell victim to avian cholera, a contagious disease, due to overcrowding.

American Canyon will continue looking to the proposed, massive Sites reservoir in Colusa County to someday help slake its thirst. The city of about 20,000 residents is the only Napa County city without a local reservoir. It depends on the state’s North Bay Aqueduct that pumps water out of Barker Slough, a dead-end slough in the Solano County portion of Sacramento-San Joaquin Delta. Supply reliability is tied to the Sierra snowpack that melts and sends water into the state’s Lake Oroville reservoir that feeds into the Delta. From year to year, it’s wait-and-see how much of the American Canyon allocation will actually arrive.

California has all the elements in place for nasty flooding because of an “atmospheric river” event: Waterlogged soil from an already-wet winter? Check. Many square miles of land scorched by fire? Check. A thick snowpack on the mountaintops? Check. And wouldn’t you know it, the hours are ticking away before another atmospheric river makes landfall somewhere in the Golden State. Welcome to West Coast winter 2018-2019, responsible for a snowbound Seattle (the most snow in February since the Truman administration), a soaked Los Angeles (its wet season rainfall exceeding 13 inches, more than 50 percent above average) and totally stoked skiers in between.

Jim Leap fondly recalls the first Early Girl tomatoes he grew at UC Santa Cruz’s farm in 1990. Sweet and bursting with flavor, they were raised without a single drop of irrigated water. Nearly three decades later, he remains deeply committed to “dry farming” — forsaking modern irrigation and relying on seasonal rainfall to grow tomatoes, winter squash, potatoes, dry beans and corn on the 4-acre San Juan Bautista farm that Leap and his wife, Polly Goldman, have owned for eight years. “What motivated us to dry farm was the environmental ethic,” Goldman said. “We are not using city water or groundwater.”

One of the more potent storms of the winter will hit California with heavy rain, excessive mountain snow and gusty winds from Tuesday night to Thursday night. The worst of the storm is forecast to focus on Central and Northern California with a heightened threat of flooding, mudslides, erosion, power outages and avalanches and road-closing snowfall in the mountains.

💧Calif. Senators Press Congress for $1B to Prep for Future Drought

Friendly reminder, thanks to some weekend rain you can give your irrigation system a break for a few days. ☔️💧 ... see moresee less