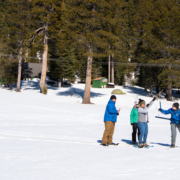 A remarkable series of winter storms in January and early February has doubled the Sierra Nevada snowpack and recharged reservoirs across the state of California. With more rain and snow in the forecast, California’s water supply picture is far better than it was a year ago, when San Diego received the second-lowest amount of rainfall on record since 1850.

In San Diego County, Lindbergh Field has recorded more than nine inches of rain since October 1, which is nearly the average annual rainfall of 10.33 inches, according to the National Weather Service. More storms are on the way: NWS has forecast more showers in the next few weeks.

Some of the wettest local spots include Mt. Woodson, which received 4.34 inches of rain in the past five days, Lower Oat Flats with 4.08 inches, Rainbow Camp with 3.6 inches, and Fallbrook and Bonsall each with 3.41 inches.

Local rainfall is important, because it allows residents and farmers to reduce or eliminate irrigation for weeks or months at time while Mother Nature does the work. In addition, local surface water meets about 10 percent of San Diego’s annual water needs. From a supply perspective, it is much more important snowpacks continue to grow in the Rocky Mountains and the Sierra Nevada.

Surveyors with the California Department of Water Resources recorded 50 inches of snow and a “snow water equivalent” of 18 inches on January 31 at Phillips Station, where DWR has conducted manual snow surveys for decades.

This was the second of five snow surveys planned for this winter. More than 50 agencies at the local, state and federal levels collaborate on the Cooperative Snow Surveys Program to collect snow data from more than 300 locations statewide each year. Results from these surveys are crucial to water management in California.

The most recent survey at Phillips Station showed the snowpack as 98 percent of average to date – just shy of the statewide average. By comparison, on February 1, 2018, measurements at Phillips Station showed a snow water equivalent of 2.6 inches – just 14 percent of the early-February average. Snow water equivalent is a standard metric of how much water is held in snow.

In the Upper Colorado River Basin, conditions are slightly better than they are in California – a good sign for a region that has suffered nearly two decades of drought. Precipitation and snow water equivalent were both at 105 percent of average at the end of January.

No shortages are expected on the Colorado River system in 2019, though long-term drought conditions continue to be a concern across the Southwest.

“This winter is shaping up nicely,” said Jeff Stephenson, a principal water resources specialist at the San Diego County Water Authority. “A well-timed string of storms and cooler temperatures is allowing us to leave water in storage for use during the dry summer months – and it’s important that everyone continue to leave off their irrigation systems while there’s plenty of water in the soil.”

No matter how the winter plays out, the Water Authority and its 24 member agencies have enough water to meet regional water demands for the foreseeable future. This is made possible by a combination of investments in drought-resilient resources, including the Claude “Bud” Lewis Carlsbad Desalination Plant, conserved agricultural water transfers and continued water-use efficiency measures.

Californians with unhealthy drinking water pleaded for help from lawmakers this week but opposition quickly developed to Gov. Gavin Newsom’s proposal to pay for system improvements with a new fee. “We just upped our water rates, and to turn around and give them a tax on their meter is just not feasible,” said Maxine Israel, director at the Cabazon Water District, which serves about 2,500 customers near Palm Springs.

On Wednesday, NASA and NOAA announced that 2018 was the fourth hottest year on record. But the impacts of a warming planet extend beyond just warming air; the feverish state of the planet is also changing when, where, and how intensely rain and snow fall. And 2018, the reports say, was the third-wettest year since 1895, when steady record-keeping began. Overall, the U.S. got 4.68 inches more precipitation in 2018 than the 20th-century average, but that rain and snow was not anywhere close to evenly distributed across the country. In the eastern half, several states, like North Carolina and Virginia, blew past their previous precipitation records, while most of the western U.S. remained mired in drought.

Thursday marks two years since the first hole opened up in the Oroville Dam Spillway, triggering an emergency that forced the evacuation of nearly 200,000 people. The crisis started on February 7, 2017. The California Department of Water Resources (DWR) had been releasing 60,000 cubic feet of water per second, when they noticed the concrete on the spillway began to disintegrate. That first day, the hole was 30 feet deep by 180 feet wide.

From the Bay Area to Los Angeles, it was a day to gaze upon snow-capped peaks, acknowledge that yes, California does have a winter, and share a photo or two on social media. And don’t expect the alpine glory — caused by a series of cold storms that dropped snow levels dramatically — to disappear soon. Wet weather will kick back up again Friday for large swaths of the state, which could bring hazardous conditions for drivers.

Low-income Californians can get help with their phone bills, their natural gas bills and their electric bills. But there’s only limited help available when it comes to water bills. That could change if the recommendations of a new report are implemented into law. Drafted by the State Water Resources Control Board, the report outlines the possible components of a program to assist low-income households facing rising water bills.

A notice published recently in the Federal Register is not sitting well with Imperial Irrigation District. That notice, submitted by the Department of Interior through the Bureau of Reclamation and published on Feb. 1, calls recommendations from the governors of the seven Colorado River Basin state for protective actions the Department of Interior should take in the absence of a completed drought contingency plan. Bureau of Reclamation Commissioner Brenda Burman set a deadline of Jan. 31 for states to complete and approve a DCP.