The tiny, remote dot in northeastern San Diego County known as Borrego Springs and its several thousand residents face a daunting task: To survive, they need to ensure they use the same amount of water as the town has in its sole aquifer, which provides declining supplies. Officials expect to have 75 percent less water available by 2040, and they say the town must allow most of its 3,800 acres of citrus and other farms — which use 70 percent to 80 percent of all the community’s groundwater — to fallow. The narrowly defeated Proposition 3, the $8.8 billion state water bond, would have provided $35 million to fallow the farms, which would then become part of adjacent Anza-Borrego Desert State Park. Now there’s talk of pursuing a new water bond or seeking help from the Legislature to fallow farms and retrain about 60 farm workers for other jobs.

After a three-year battle to keep their underground job site from flooding, the construction crew at Lake Mead is ready to let the water win. Sometime late next week, workers plan to shut off the pumps keeping the water out and allow it to fill the cavern they have carefully excavated more than 500 feet beneath the shore. The move will mark the latest milestone for the Southern Nevada Water Authority’s low-lake-level pumping station, a $650 million safety net for a community that draws 90 percent of its drinking water from Lake Mead.

A group of powerful Imperial Valley farmers and their irrigation district need to work together for the benefit of the region, according to Superior Court Judge L. Brooks Anderholt. He warned a fight between the two sides over rights to Colorado River water and the need to address a prolonged drought across the Southwest could spur action by Congress, or end up in the U.S. Supreme Court. 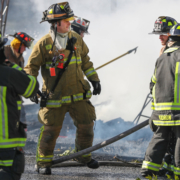 When residents in De Luz were forced to evacuate about 100 homes during the Rock Fire in July, an emergency generator installed by the Fallbrook Public Utility District proved its value by providing water to help firefighters extinguish the blaze.

The generator was installed about a year ago at the Donnil Pump Station at a cost of about $140,000. Since then, several fires have sparked in the hilly backcountry community north of Fallbrook.

The quick-burning Rock Fire broke out mid-afternoon on July 28 near Sandia Creek and Rock Mountain just south of the Riverside County line. The blaze grew quickly to 74 acres within two hours. Nearby residents were advised to evacuate, affecting about 100 homes.

San Diego Gas & Electric shut off the power for safety to 530 residents in the area at 4:12 p.m., according to information on the SDG&E outage website. The outage cut power to the pump station. FPUD kept water running thanks to the new generator, which is among several recent district projects and upgrades designed to maintain water service during emergencies.

The fire grew to 225 acres, but by 7:30 p.m. the forward spread was stopped. Power was restored gradually through the night, and the evacuation order was lifted the next morning.

“Now, we can cover nearly all of the De Luz area during a power outage,” said FPUD General Manager Jack Bebee. “Fire has the potential to quickly spread, so this is a very important safeguard to have in place.”

The Donnil Pump Station conveys water from the San Diego County Water Authority’s aqueduct to the high-pressure zone in De Luz. The station was built before FPUD merged with De Luz Heights Municipal Water District in 1990, and it serves as the principal pump station in that area.

The pump station was upgraded as part of the district’s capital improvement plan. Without an emergency generator, water supply to the area could be cut off during a power outage. If that occurs during a wildfire, it could reduce flows for firefighters when they need it most to protect the community.

When residents in De Luz were forced to evacuate about 100 homes during the Rock Fire in July, an emergency generator installed by the Fallbrook Public Utility District proved its value by providing water to help firefighters extinguish the blaze. The generator was installed about a year ago at the Donnil Pump Station at a cost of about $140,000. Since then, several fires have sparked in the hilly backcountry community north of Fallbrook.