Following nine years of research, a California agency has proposed to increase water flows in the San Francisco Bay-Delta Estuary. But the decision is causing contention between farmers and fisheries. The California State Water Resources Control Board says the proposal will prevent an ecological crisis, including the total collapse of fisheries. About 70,000 fall-run Chinook salmon adults returned to the San Joaquin Basin in 1984, but that number fell to just 8,000 in 2014.

The way environmental activists in California’s Delta region tell it, there is no part of government in this state more arrogant than the Metropolitan Water District of Southern California. The huge MWD, supplier of water to the majority of the state’s populace, is certainly acting the part as it pushes for a project Gov. Jerry Brown is trying to make an irreversible fait accompli before he leaves office at the end of this year.

The calendar says it’s the first of August. But an unforgiving early wave of heat means that California’s landscape feels as dry as September, igniting a deadly wildfire season up and down the state. Hot and dry as a powder keg, recent weather has accelerated the normal drying of western landscapes, turning vegetation into kindling, say weather experts. Even nights are warm. “Fuels are really really dry. It’s closer to what we should get by late summer or early fall,” said professor Craig Clements, director of the Fire Weather Research Lab at San Jose State University. 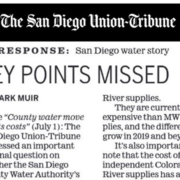 The San Diego Union-Tribune on July 28 published and In Response article by Water Authority Board Chair Mark Muir that addressed a serious omission in a July 1 story about the cost of the regional water supply diversification strategy.

Said Muir: “Unfortunately, the story omitted clear-cut evidence that the region’s supply reliability strategy is an unqualified success: Our independent water supplies from the Colorado River are both less expensive and more reliable than supplies from the Metropolitan Water District of Southern California, which have been cut twice in the past decade by drought.”

Click here to read Muir’s published response. In addition, the paper has posted two corrections to the story.

However, the paper’s In Response format didn’t allow enough space to address other substantive problems in the July 1 story that the Water Authority had raised with the U-T.

For instance, the story inaccurately presented MWD’s water costs, which are actually about 30 percent higher than cited in the story because MWD adds substantial fixed charges on top of its volumetric charges, requiring additional calculations to arrive at a valid comparison with the cost of water from the Water Authority’s other sources.

“Clearly, Water Authority investments in more reliable supplies and large-scale infrastructure have contributed to higher local water rates, and we have never said otherwise,” said Muir in the article submitted to the U-T that was edited for space constraints. “However, no factor has had a bigger impact on wholesale treated water rates in our region since 2008 than rate increases imposed on us by MWD – a fact that would have helped readers understand the value of reducing reliance on MWD.”

The story also failed to serve readers by presenting Steve Erie as an objective, disinterested academic. In fact, Erie has been a paid consultant and expert witness for MWD in two major lawsuits against the Water Authority. Mr. Erie is entitled to his opinions and the U-T is entitled to print them – but the paper should have disclosed his business relationship with MWD, in which he was paid $250 an hour for his services.

Finally, it’s important to note that the story significantly undercounted the amount of water produced locally. In 2020, for example, the Water Authority expects the San Diego region will generate 39 percent of its supplies locally (not 30 percent, as the article said).

“Converted to gallons, that’s approximately the annual production of the drought-proof Claude ‘Bud’ Lewis Carlsbad Desalination Plant – a critical component of a successful, cost-effective strategy to support our region’s economy and quality of life,” Muir said.

San Diego County didn’t escape the extreme weather happening around the planet in July that produced massive fires above the Arctic Circle, a deadly heat wave in Japan, and a 124 degree day in Algeria believed to the highest temperature ever recorded in Africa. The county had it’s own set of remarkable temperatures that stressed both plants and people. The city of San Diego had its hottest July in a dozen years and its fifth hottest since 1874. The month was 5 degrees warmer than normal, and the 96 degrees recorded on July 6 was the third highest reading ever seen in July.

The northern Sacramento Valley was well on its way to recording the hottest July on record when the Carr fire swept into town Thursday. It was 113 degrees, and months of above-average temperatures had left the land bone-dry and ready to explode. Within a few hours, hundreds of structures were lost and six people killed.