You are now in Conservation Corner Features category. 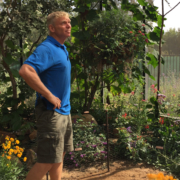 WaterSmart landscapes are transforming San Diego County’s neighborhoods in part due to the work of Paul Redeker and his colleagues at The Water Conservation Garden in El Cajon.

“We’re a learning center, not just a place where you’re surrounded by beautiful plants,” said Redeker, who recently returned for a second run as director of horticulture and facilities the garden. “All of our exhibits are geared toward teaching. We are all about educating the public to be inspired to make changes in their lives because we’re literally at the end of the water pipeline.”

Driving that point home is a giant pipe protruding from a landscaped embankment with water trickling from its opening into a lily pond near the entrance to this one-of-a-kind, six-acre conservation showcase on the campus of Cuyamaca College.

“I love the educational element,” Redeker said. “The learning that goes on in this garden regarding low-water options is wonderful.” 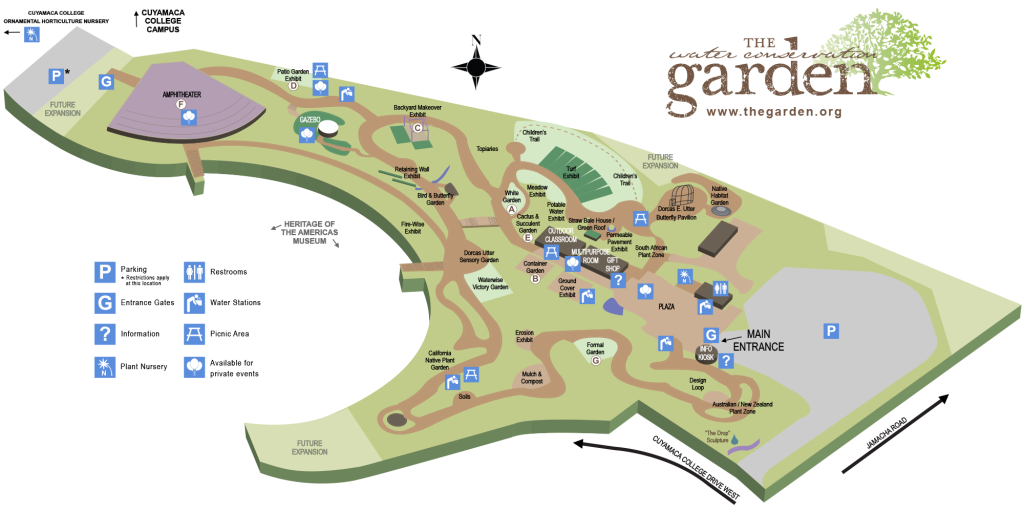 The Water Conservation Garden feature a Native Habitat Garden, the Compost Exhibit, the Veggie Garden and the Succulent Garden. Take a free, docent-led tour the first Saturday of each month at 10 a.m. Illustration: The Garden

Opened in 1999, The Water Conservation Garden is owned by a joint powers agency comprising the San Diego County Water Authority, the Otay Water District, the Helix Water District, the Sweetwater Authority, the City of San Diego Public Utilities and Cuyamaca College. From the start, the garden was seen as an important conservation tool in a region with few natural water resources.

More than 30,000 people visit each year, and the garden’s programs reach an additional 80,000. It is the educational element that lured Redeker back. “The learning that goes on in this garden regarding low-water options is wonderful,” he said.

Born and raised on a Sonoma County ranch, Redeker earned his bachelor’s degree in ornamental horticulture, with a focus on landscape design, from Cal Polytechnic State University at San Luis Obispo. He worked at several Northern California nurseries before exploring other career interests overseas.

Redeker returned to California and was designing landscapes for a San Diego company when he fell in love with public gardens and landed a position as The Water Conservation Garden’s director of horticulture more than 10 years ago.

After five years in El Cajon, he expanded his professional expertise at the San Diego Botanic Garden, another regional showcase garden in Encinitas. “It gave me a wonderful understanding of how larger gardens operate,” said Redeker.

A constantly evolving gem of a garden 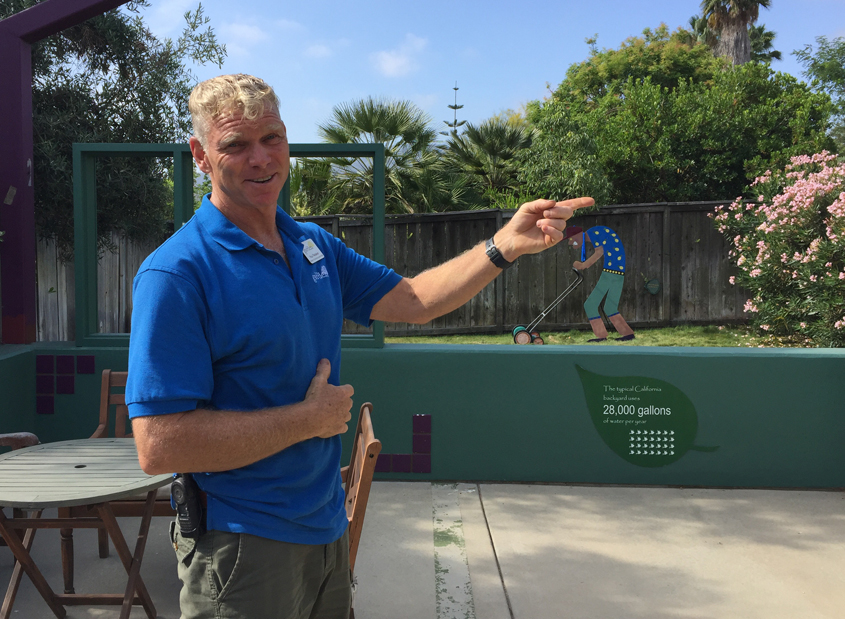 Redeker returned to his “little gem of a garden” last fall, and he is thrilled with the opportunities to innovate. “We are always looking to improve the experience so that when people come back, they can see something new and fresh,” he said.

Projects under way or in the planning stages at The Water Conservation Garden include:

“The new classroom is going to be huge for us,” said Pam Meisner, the garden’s director of operations and programs. “We simply don’t have the room to accommodate demand for all of our adult-education landscaping and gardening classes.”

Among the permanent features is a Retrofit Backyard Exhibit that includes a traditional backyard lawn – complete with a depiction of a homeowner struggling to mow a greenbelt that drinks some 28,000 gallons of water annually – adjacent to a more visually appealing, and less labor-intensive garden featuring drought-tolerant plants that uses just 6,000 gallons of water each year.

“People are being smarter and much more creative with what they’re doing with their landscape,” said Redeker. “We’re seeing smarter plant choices, more hardscape, more patios, more mulch, dry streambeds and the like, and it’s making a difference.”

For the first time since California’s dam-building boom ended nearly a half century ago, state officials on Tuesday approved a windfall of cash for new water storage projects, setting the stage for at least a mini-resurgence of reservoir construction. The historic $2.7 billion of voter-approved bond money will go to elevating two Bay Area dams, at Los Vaqueros Reservoir near Livermore and Pacheco Reservoir east of Gilroy, as well as to the development of two much larger dams in the Central Valley. Funds also will go to four less traditional endeavors that store water underground.

Hoover Dam helped transform the American West, harnessing the force of the Colorado River — along with millions of cubic feet of concrete and tens of millions of pounds of steel — to power millions of homes and businesses. It was one of the great engineering feats of the 20th century. Now it is the focus of a distinctly 21st-century challenge: turning the dam into a vast reservoir of excess electricity, fed by the solar farms and wind turbines that represent the power sources of the future.

Historic heat records fell in California earlier this month. Yet, two weeks later, another mass of warm air has returned to the southern part of the state, heating the region for days. The second heat wave of July will last from Monday through Thursday, said the National Weather Service. While this heat won’t be quite as severe as the last, it’ll still bring “record and near-record high temperatures” to different areas of California. As average temperatures around the globe continue their accelerated rise, extreme heat events like these are becoming more and more frequent.

California officials Tuesday awarded $816 million in voter-approved bond money to build Sites Reservoir, an hour north of Sacramento, providing a financial boost for what would become the largest water storage project built in the state since the 1970s. Approved by the State Water Commission, the funds were the most given to any of the eight projects across California under consideration for a part of the $2.7 billion Proposition 1 water bond. Voters passed the bond in 2014 during the state’s historic drought.

California water officials have approved more than $2.5 billion for eight water projects across the state, marking one of the largest investments in water storage in decades. The proposed projects, including two in the Bay Area, will now begin seeking permits and looking for the remaining funding they need. Half of the eight projects approved on Tuesday by the California Water Commission are more traditional reservoirs and dams, while the other half focus on groundwater storage and recycled water.

WaterSmart landscapes are transforming San Diego County’s neighborhoods in part due to the work of Paul Redeker and his colleagues at The Water Conservation Garden in El Cajon. “We’re a learning center, not just a place where you’re surrounded by beautiful plants,” said Redeker, who recently returned for a second run as director of horticulture and facilities the garden. “All of our exhibits are geared toward teaching. We are all about educating the public to be inspired to make changes in their lives because we’re literally at the end of the water pipeline.”

n the Anza-Borrego desert, where a puff of wind can leave you choking on peach-colored dirt, Andrea Taylor got straight to the point Tuesday when asked to describe the weather. “It’s hotter than hell,” said Taylor, who works in the Anza-Borrego Desert Natural History Association office in Borrego Springs. “I think that’s the official statement.” The temperature peaked at 118 degrees at Borrego Springs on the second day of a heat wave that is expected to last until Thursday, when it fades, like air leaking from a balloon.

During California’s recent five-year drought, it was common to hear people asking why the state doesn’t build more dams. On Tuesday, flush with cash from voters, the administration of Gov. Jerry Brown is expected to finally do just that, committing nearly $1 billion to build two huge dam projects in the Bay Area and an additional $1.5 billion for six big water projects from the Sacramento Valley to Bakersfield.