Even though we are entering another summer drought-free, Governor Jerry Brown just signed two new water conservation bills into law. These laws will require permanent water conservation, regardless of whether or not California is in a drought. KALW’s environment reporter Angela Johnston tells us more on AB 1668 and SB 606.

California is one step closer to getting a cut of $2.5 billion over the next decade for its water needs now that the House has passed a bill aimed at funding water research and infrastructure projects. The drought-stricken state has positioned itself as independent of the federal government — most notably, the Trump administration — on issues ranging from immigration to health care coverage. However, it still turns to federal lawmakers when it needs a financial boost for an issue as central to the state as water.

In California’s San Joaquin Valley, one of the most productive farming regions in the nation, an estimated 150,000 people are stuck living with contaminated drinking water. When they open a tap to fill a cooking pot or take a shower, the water that gushes out is contaminated with nitrates, hexavalent chromium, arsenic and other nasties from polluted wells.

A plan to hit Californians with a first-of-its-kind statewide tax on drinking water is on ice, for now. The proposed tax would cost most Californians about $1 per month on their residential water bills. Businesses would pay $4 to $10 per month. Although California voters just approved another $4 billion in bonds including funds for clean water, and the November ballot will ask voters to approve about $8 billion more, Gov. Jerry Brown says it wasn’t enough. He pushed for the  tap-water tax to raise another $140 million per year to clean up contaminated drinking water for 360,000 rural Californians, mostly in the San Joaquin Valley. 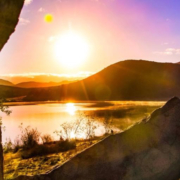 A beauty shot of an East County reservoir and a portrait of a young couple at Sunset Cliffs took the top prizes in the San Diego County Water Authority’s “Brought to You by Water” photo contest in honor of Water Awareness Month in May.

Photos featured the best of San Diego County from ocean to desert, and a few places farther afield. Subjects included everything from flowers and waterfalls, to wildlife and children, as photographers used their images to describe ways in which water plays a vital role in their favorite activities and quality of life.

“This contest is a fun opportunity for our community to come together and reflect on the importance of this precious resource,” said Mark Muir, chair of the Water Authority’s Board of Directors. “It’s inspirational to see all the ways people interact with and value water.”

Kris Dailey of San Diego won the first grand prize, as selected by Instagram user likes. Her photo of a Sunset Cliffs sunset featured Kris with her husband in the contest’s most liked photo. Water plays a background role in Dailey’s image, accompanied by the caption: “Water is like my spouse, without it I can’t live.”

Maile Guerrero of La Mesa won second prize as selected by a panel of Water Authority judges based on its originality, composition and connection to the contest theme. Guerrero’s image of Sutherland Reservoir near Ramona was accompanied by the caption, “Fresh water reservoirs in the county are a vital resource for our drinking water infrastructure.”

The Water Authority also recognized Ed Henderson of San Diego as the third-place winner for a photo of Cedar Creek Falls, a popular backcountry hiking destination. Fourth place went to David Norris of San Diego for an underwater scene shot at the San Diego Zoo. Honorable mention went to Heidi Couture of Santee for an image of a rainbow over a South County reservoir.

For more information on the Water Authority’s Brought to You by Water outreach and education program, go to B2UbyH2O.org. All contest entries can still be viewed and enjoyed at https://www.instagram.com/sdcwa/

Scattered showers continue this afternoon across #SoCal and are expected to ... continue through tonight.

Keep those reports coming of what you're seeing out there! #cawx

Working from home? Add a glass of water to your desk for easy hydration.