You are now in California and the U.S. category.

With long-term drought conditions well on their way back into California, an incoming period of wet, stormy weather will be welcome by many. A recent bout of heavy rain brought as much as one-third to 100 percent of the month’s normal precipitation to several cities, including Santa Barbara, San Diego and Los Angeles. In addition to the heavy high-elevation snowfall of recent weeks, it may seem like the area is well on its way out of the drought – however, it will take many rounds of similarly wet days to bring the water supply back to necessary levels.

In May 2017, San Diego city officials made an important announcement regarding the future of the city’s water supply. According to the San Diego Union-Tribune, the city planned to blend treated sewer water with the regular drinking water supply. Fast forward to 2018 and the project is moving right along. On March 6, the State Water Board announced the approval of new regulations. These detail the use and quality of recycled sewer water that will later blend with surface water reservoirs.

Not if, but when. That’s the future of water desalination plants in Arizona, according to the head of the state’s water department. They are controversial and expensive, but Arizona’s current leadership views desalinated water – or “desal” – as key to the state’s long-term water plans. Arizona sits atop an estimated 600 million acre-feet of brackish water.

Not if, but when. That’s the future of water desalination plants in Arizona, according to the head of the state’s water department. They are controversial and expensive, but Arizona’s current leadership views desalinated water – or “desal” – as key to the state’s long-term water plans. Arizona sits atop an estimated 600 million acre-feet of brackish water. “Desalination is in our future,” said Thomas Buschatzke, director of the Arizona Department of Water Resources. In late 2016, the state formed a committee to study the feasibility of desalination for a region with rising population and droughts exacerbated by climate change.

Just how bad was California’s last drought? For most of Southern California, it was either the worst or second worst since the century Columbus landed in the New World, the Ottoman empire was started and Joan of Arc was burned at the stake. In other words, it was one of the worst since the 1400s, according to a study released Monday by the California Department of Water Resources. Compiled by examining trees in the southern half of the state, the study put the five-year drought in some historical perspective.

In my last post, I mentioned that upcoming storms would (finally!) start to chip away at the huge seasonal precipitation deficit that has accumulated this year throughout California–but that this storm series would be far from a “Miracle March.” So far, that expectation has largely been borne out: fairly prodigious multi-foot snow accumulations did occur throughout the Sierra Nevada, and the overall amount of water stored in the statewide snowpack doubled nearly overnight.

Two storms are projected to dump up to 100 inches — that’s more than eight feet — of snow in the Sierra Nevada mountains Tuesday through Saturday, according to new projections from the National Weather Service. Sacramento is expected to get two to three inches of rain by Saturday, including a half-inch to an inch-and-a-half and 20-30 MPH winds by Wednesday. The heaviest rainfall is forecast for Tuesday morning and Thursday afternoon through Friday morning.

Santa Barbara County authorities ordered mandatory evacuations Monday for residents below fire-ravaged mountains ahead of a “fast-approaching” storm that could cause flooding and mudflows. “Those hills are filled with silt, with rocks, with boulders, there’s plenty more up there that could come down,” Sheriff Bill Brown told reporters Monday, adding that conditions may be more precarious than in January, before deadly mudslides swept through Montecito. “Don’t be fooled into thinking that this can’t happen again.”

California and Arizona both have laws meant to ensure new housing developments have enough water. In California, major new developments with more than 500 units must prove they have access to enough water for at least 20 years. Most water agencies, including the San Diego County Water Authority, have water already set aside for population growth, so this is usually a pretty simple thing to do. 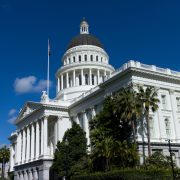 SACRAMENTO – Stakeholders statewide are reviewing and analyzing recently released new legislative language for two water-use efficiency bills that generated opposition by water agencies, including the Water Authority, when they were introduced last year.

The companion bills – AB 1668 authored by Assemblymember Laura Friedman (Burbank) and SB 606 by Sen. Bob Hertzberg (Van Nuys) –  propose a new water conservation ethic and aggressive water-use standards for Californians. Dozens of water agencies and stakeholders opposed the bills because of concerns related to enforcement of new laws and their failure to encourage development of new supplies such as potable reuse.

During winter recess in Sacramento, opponents provided more input on refinements that would be needed to earn water agencies’ support; some of those suggestions have been incorporated into the bills, but a number of important policy and implementation issues remain unresolved.

The Water Authority also remains actively engaged with local and regional organizations throughout San Diego County to communicate the agency’s policy positions on the long-term water use efficiency legislation.